Cosmos Flower Meaning: Everything You Need to Know

Symbolism is an age-old tradition of all cultures and civilizations. People have been associating their emotions with different things for ages. Love, fear, enmity, hatred, good and bad luck all are symbolized by certain things for the beautification of the culture. Positive emotions are the base of human development and have been symbolized by different things like doves, white flowers, hearts, red roses, chocolates, green gems, and cosmos flowers. The cosmos flower is a symbol of beautiful emotions like deep never-ending love, sincerity, innocence, and loyalty. It also denotes harmony and serenity. In this article, we will highlight the various aspects of Cosmos Flower Meaning, history, and some other interesting facts. 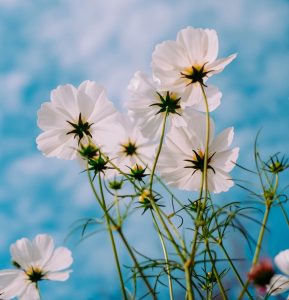 The beautiful Cosmos flower belongs to the family. Initially originated from the scrub and meadowland in Mexico, It was imported to America and South Africa from Argentine. It was introduced to American gardens in the 18th century. Cosmos and many other flowering perennial plants of the Sunflower family belong to the main family Asteraceae. The popular Daisy flower is a sister to Cosmos according to looks and biological classification. The well ordered fragrant petals of this flower giving it a serene and calm look are the base of its popularity. It can grow up to a height of 6 feet.

It was the priests of Spain who planted these flowers from seeds and got mesmerized by the beauty and named it Cosmos. Cosmos flower occurs in many different colors like yellow, orange, golden ( Cosmos Sulphureus) while popular species are in the shades of pink and purple( Cosmos Bipinatus).

Other  Names Of Cosmos Flowers

Due to its central disc with surrounding petals, its structure looks like a basket. So it is also known as the “Basket Flower”.
These flowers have different common names as mentioned below:

Cosmos is derived from a word of Greek Language “Kosmos” meaning “order” and “the universe’s harmony”. This cultural concept makes the flower a sign to depict the serenity and calmness of the universe and nature. As the Greek gods believed that nature is in perfect harmony. 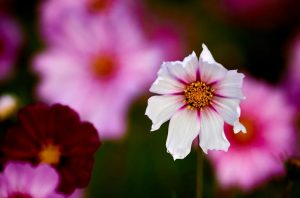 Like the red roses depict true love and white jasmine flower shows wishes for a healthy long life, similarly many flowers depict some certain signs. The Cosmos flower due to its mild and simple outlook depicts never-ending love. 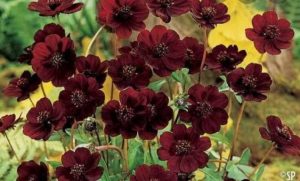 This species is dark brown to reddish-brown with a soft velvety surface. Its distinctive fragrance resembles that of chocolate, giving it an interesting name. The more interesting fact is that you can not eat it!! The Cosmos astrosanguineus are easily cultivatable plants with the mouthwatering fragrance getting stronger as the sun dies. This variety is extinct in the wild as it does not reproduce by self-pollination. If you get to see this beautiful flower in wild around you, it means that it is a cultivar and a selective propagation. This is usually cultivated by vegetative propagation methodology or tissue culture technology. These flowers can be grown both outdoors and indoors. They need around 5 to 7 hours of full sun to bloom beautifully.

The chocolate cosmos flower meaning is to communicate your feelings of intense love. The shy ones who want to convey their emotions to the loved ones can give a beautiful bouquet of the Cosmos and it will give words to their deep emotions. This flower is a depiction of passion, desire, and sensuality. Simply stating, the Chocolate Cosmos Flower means “nobody else can love you more than I do”. So you do not need to do much effort to show your love, just send a bouquet of beautiful Chocolate Cosmos Flowers and you are done. Interesting, isn’t it?

In the modern world, October is said to be the month of anniversaries and birthday parties. This is the peak time this velvety chocolate beauty gets bought and gifted. Here the chocolate cosmos meaning is to show feelings and good wishes. October born people get these flowers as a frequent gift. These flowers are associated with this month in particular because they make a good warm look for the upcoming cold season.

People also use them widely as an ornamental flower in the flower decoration for the venues of the functions. These are good cut flowers so they are popular in all kinds of decorations and bouquet making.

Due to its bright and strong color, the chocolate cosmos meaning is Masculinity as well. Giving it to someone shows that “you are attractive and manly for me.” If used for the decoration of some one’s birthday or other function, it depicts the strength and masculine beauty of that man. 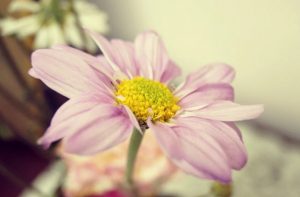 The Cosmos flower has a whole detailed symbolism attached to it by the ancestors of human cultures. The flower of Love is pretty famous as an expression of love.

This flower was used in the World Kindness Movement by the end of the 19th century. Being a sign of kindness, it was used as a symbol of the movement.

One aspect of Cosmos Flower Symbolism is that it depicts tourism on minor levels due to its minor and simple structure. The species Cosmos Hanatsumi symbolizes the Harvest Hill festivity. This place is an attraction for tourists due to the annual flower picking festival. In September and October, tourists walk for long distances and collect flowers to take them home. They pay a good accumulated amount as the entrance ticket which is denoted by the Cosmos flower. In the world of spirituality, the Cosmos flower is attached with several unique and interesting facts.

One such belief is that it opens the energy blocks and if used along with jewelry items, it is believed to bring vibrant energy and health for the wearer.

In old ages, people believe it as a flower of longevity. If a petal is added on the base of the vine glass, it is considered to bring good health and long life for the drinker.

One Cosmos Flower Meaning in Spirituality is that it is related to the throat chakra. It will open the energy blockages and charge up the throat region and it is believed to help people with issues in speaking. Public speakers used to keep the flowers around to enhance their energy while in public. As throat chakra is related to the throat region, this flower is spiritually attached with the powers of peaking and convincing.

The Geometry of 19 Circles:

In ancient spirituality concepts, the Cosmos flower has its 19 circles. This is considered to produce positive vibrations around the person and in the atmosphere. So it attracts all kinds of pleasant and positive energies. The mathematical and universal laws are related to the 19 circles in the Pythagoras Theorem, the Pyramids, Tree of Life, The Merkabah, and the squaring of the circle. This adds to its importance in sacred geometry. It is also used in the construction and beautification of churches, temples, and pyramids.

It is considered to be a sign of protection. In experimentation of bio resonant devices, the flowers were found to increase the positive energy.

The simple Cosmos flower has been associated with different symbols for ages. Ancient cultures have their uses and symbolism attached to it. The Cosmos flowers are associated with love, peace, beauty, loyalty, and innocence. The modern world considers Cosmos flowers as a sign of positivity and good vibes. These flowers have significant importance in the spiritual world being attached with longevity, protection, and convincing communication through the throat chakra. Simple and low maintenance flower has a whole set of meanings and symbolism attached to it.

Apple Garden: Everything You Need to Know

Wireless Zelkova: Everything You Need to Know

How to Make a Hydrostatic Lawn Mower Faster

Hydroponic Roses: Everything You Need to Know